VICTORIES and the fight to make it a reality
Small victories lead to bigger ones, which add up to policy changes and paradigm shifts. For human rights defenders, these moments are sacred and point to a brighter future. 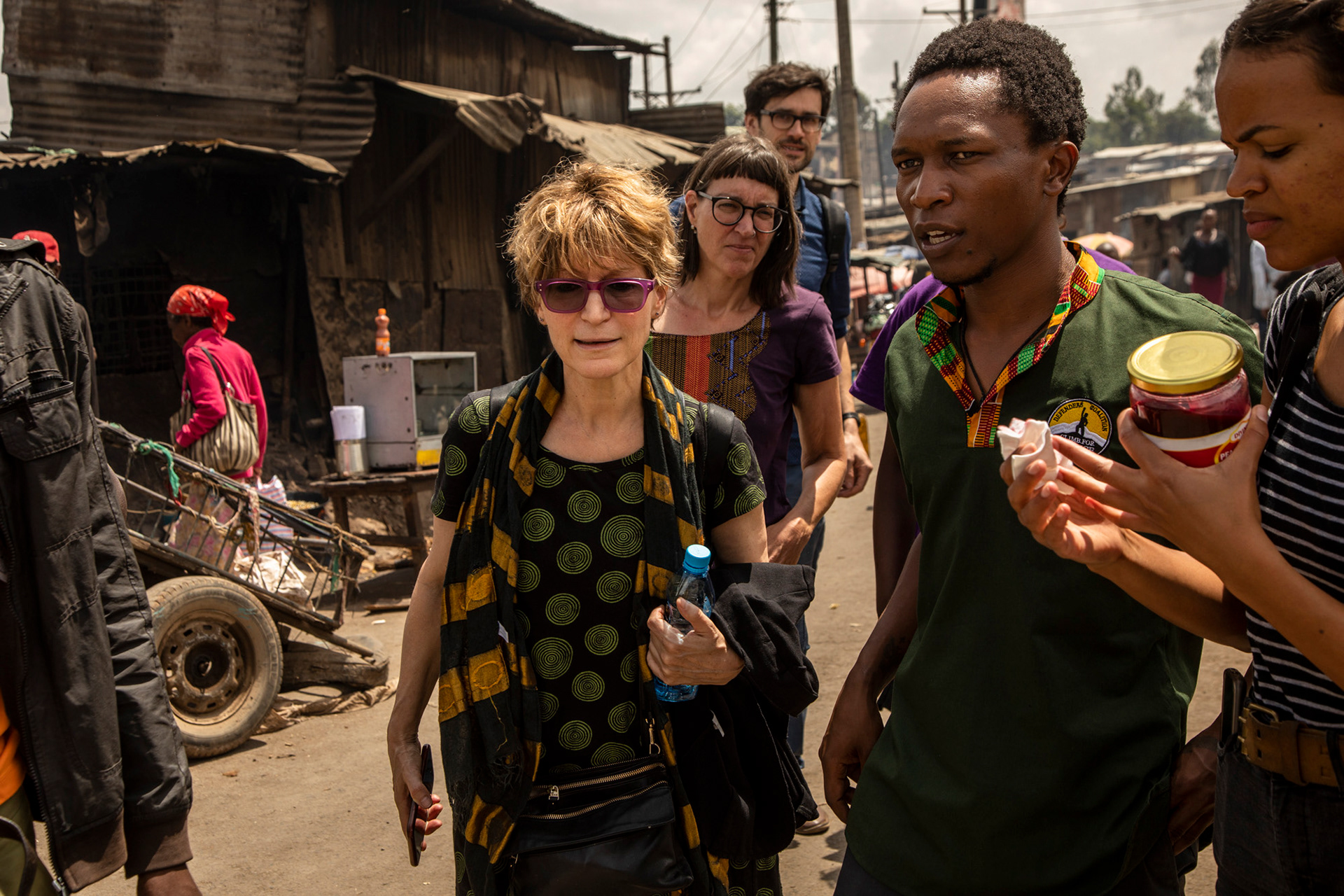 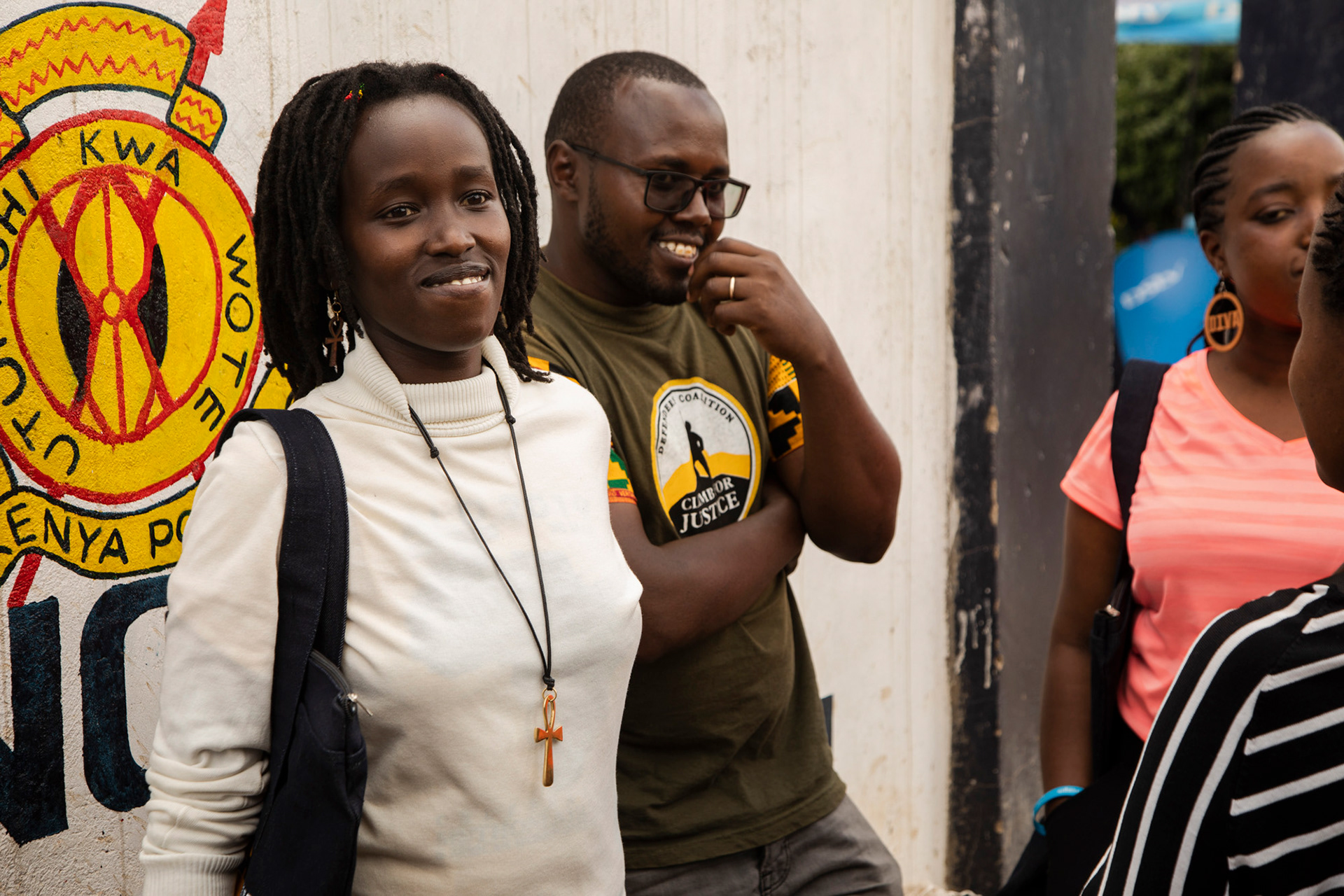 Dr Agnes Callamard, the UN Special Rapporteur on extrajudicial, summary or arbitrary executions visited Mathare, one of Nairobi's informal settlements, in Kenya. There, she meet human rights defenders fighting against extrajudicial executions in Mathare Social Justice Centre. ​​​​​​​
See more photos
Watch short documentary
"I feel hopeful that there are people in Kenya who will be able to bring justice and put an end to those absolutely cruel executions by people who should be protecting the community and are in fact killing the community." Dr Agnes Callamard

"Even within our own country, HRDs who thought - well, the model of the justice centres sounds like a good idea, but it’s a huge challenge. I don’t think you guys will achieve it.- But now everybody wants to open a justice centre within their own communities.​​​​​​"Steve Kinuthia
Steve Kinuthia is a paralegal coordinator at the Mathare Social Justice Centre in Nairobi, Kenya. For years, the urban settlement of Mathare has suffered various forms of structural violence, including: land grabbing, forced evictions, police abuse and extrajudicial killings, political impunity and other economic, social and psychological violations. This violence has been allowed to go on without any retribution to the community, especially as most of the community continues to live in fear of the consequences of standing up for their rights.​​​​​​​
"So where we started as four human rights defenders, we were joined by PBI and through that progressive engagement we now have a network of 30 social justice centres in the country." Steve Kinuthia
Juliet Wanjera is a co-founder of the Mathare Social Justice Centre and a co-ordinator the women group in the social justice movement. In 2017 just one SJC was operating in Kenya, today there are 28, each striving to promote social justice and protect human rights in their communities. The larger centres reach out to between three and five thousand community members.  The fact that the movement of SJCs has been able to grow at this pace and in these conditions is remarkable. In September 2019, the first Social Justice Centre in Uganda was opened, showing the interest of grassroots activists in other countries and showing potential for expanding the concept of SJCs in the area of East Africa or further.​​​​​​​
"We have come together to consolidate our efforts to have one voice and we say - we want social justice!" Juliet Wanjira

Tita Radilla is vice-president of the Association of Relatives of the Detained-Disappeared in Mexico (AFADEM), based in Atoyac de Alvarez, Guerrero State, Mexico.  For more than 35 years, Tita Radilla has been pursuing justice for the relatives of Mexico’s disappeared. Tita’s father disappeared after he was stopped at a military checkpoint in 1974.
In an unprecedented ruling in December 2009, the Inter-American Court of Human Rights (IACHR) condemned the Mexican government for Radilla’s forced disappearance. In its defence, the government claimed it could not be held responsible for crimes committed 35 years previously. However, the Court ruled that because the government had continually failed to investigate Radilla’s disappearance, the crime was ongoing and could not be relegated to the past. Rosendo Radilla is still missing, and his family still mourning.
"The families end up searching for and finding their disappeared relatives. It just shouldn’t happen like that. It is the State’s obligation to search for them and find them." Tita Radilla
"Article 1 of the Constitution used to be 'Individual Guarantees', but now it is 'Human Rights and Guarantees', which has been derived precisely from this sentence." Tita Radilla
Crucially, the Court recognised Radilla’s disappearance within the context of systematic human rights abuses against the civilian population, observing that these constitute crimes against humanity. It has ordered Mexico, as a signatory of the American Convention on Human Rights, to reform the military code which guarantees impunity to military personnel and to investigate the circumstances of Radilla’s disappearance after he was detained by soldiers at a military checkpoint in 1974. 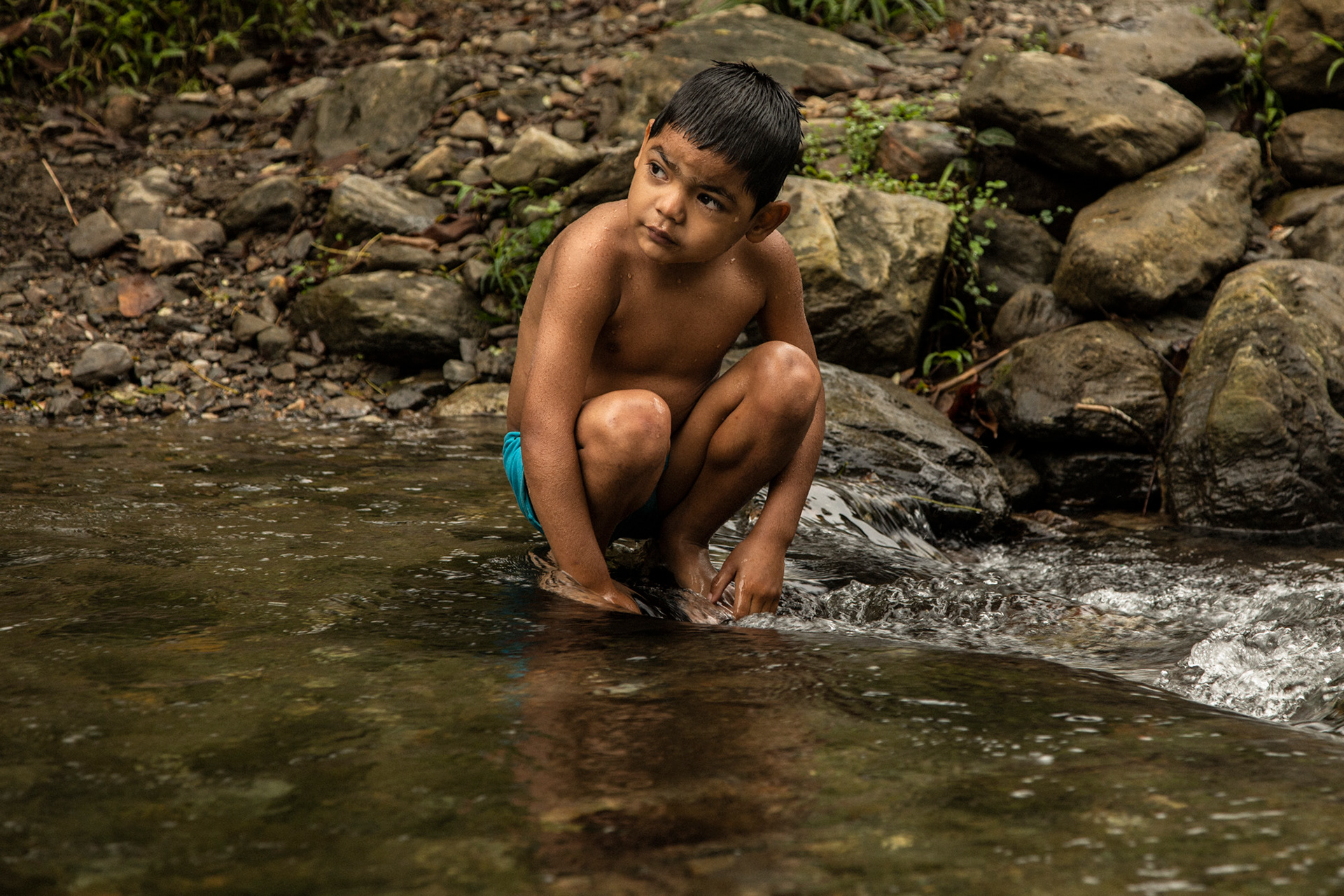 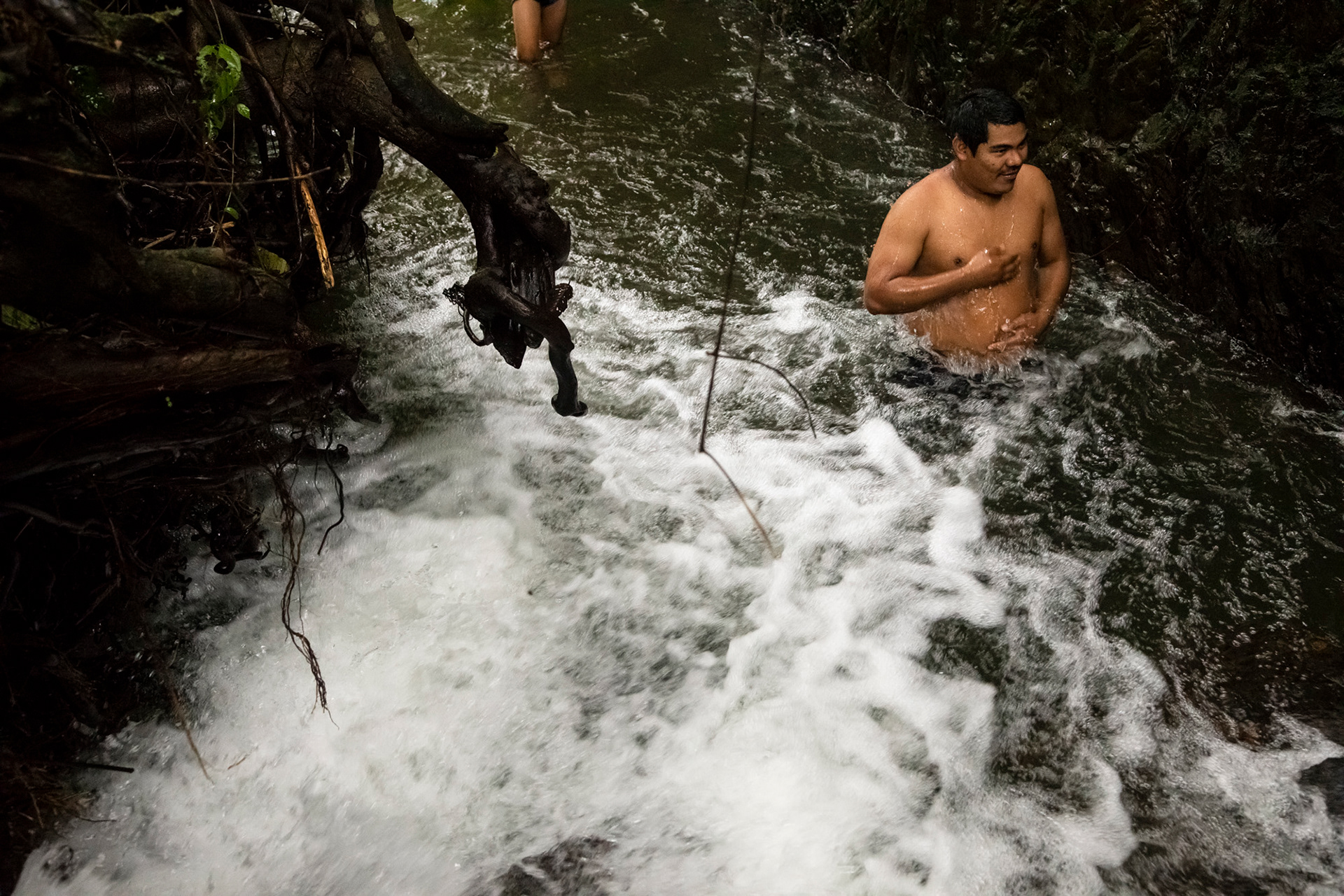 Kevin Ramírez is an environmental activist who lives in the community of El Listón, Santa Barbara, the area of Honduras with the most hydroelectric and mining concessions. He co-founded the Association of Defenders of Common Goods in Quimistán (ASODEBICOQ), an organisation that helps communities to self-organise and informs them of their rights in the face of mega projects.
Kevin Ramírez currently serves around 28 communities in the area and thanks to his efforts the work of one the dams has been suspended.
See short documentary about Kevin
See more photos 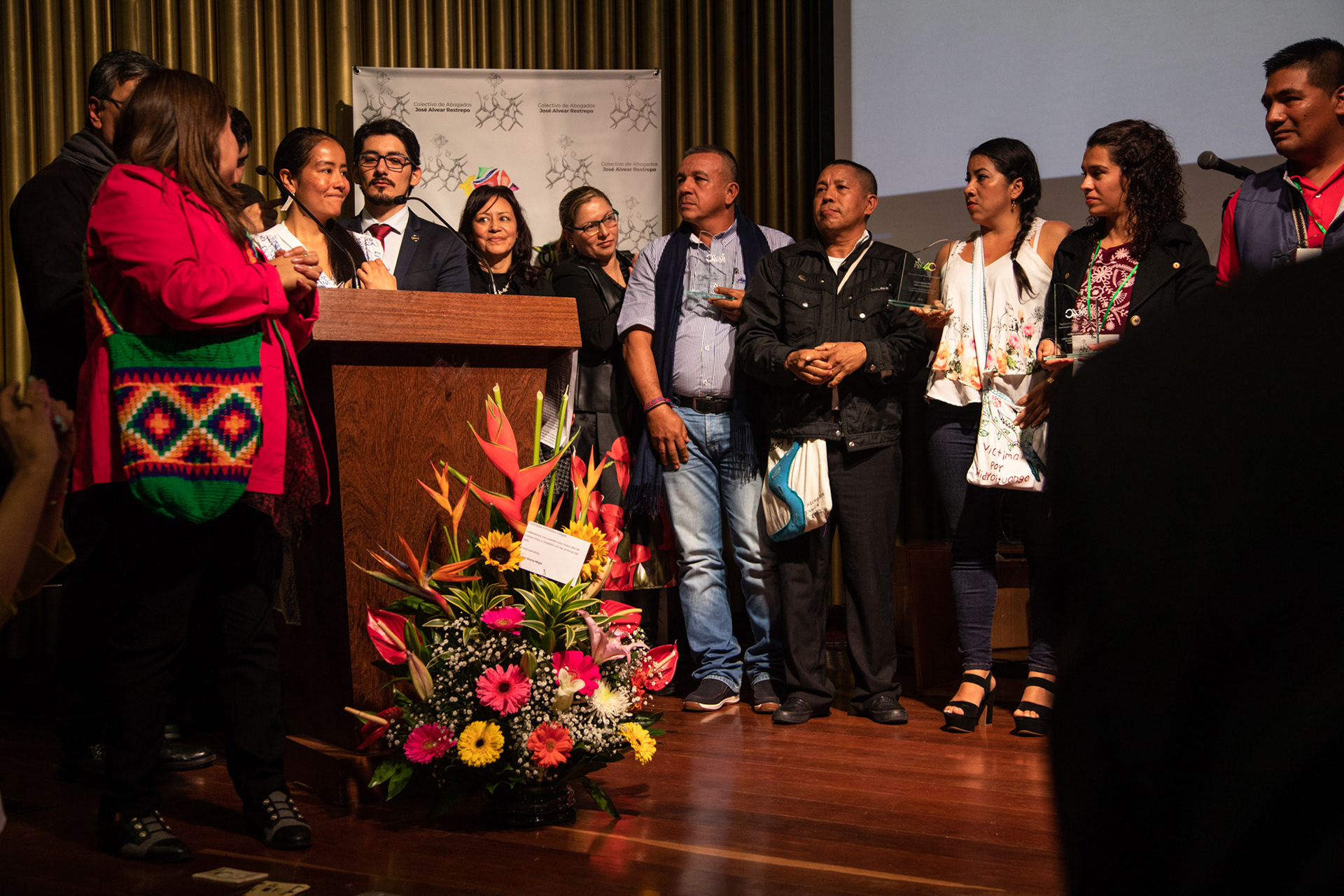 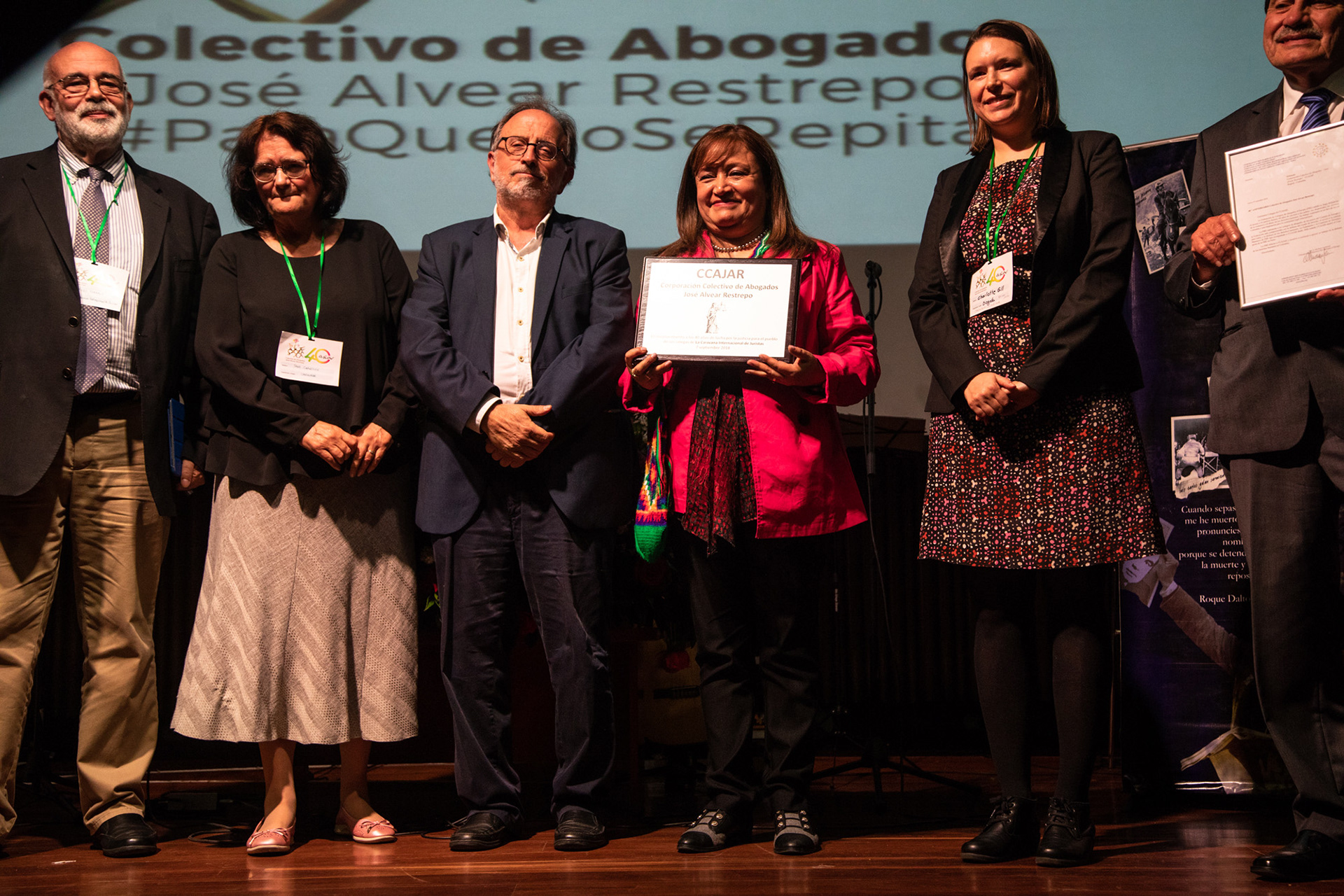 The José Alvear Restrepo Lawyers' Collective (CCAJAR) is a Colombian non-governmental human rights organisation, which aims to contribute to the fight against impunity and the construction of a just and equitable society. The organisation is recognised nationally and internationally for representing emblematic cases of human rights violations in Colombia, both within the Colombian justice system and before the Inter-American System of Human Rights.
Reinaldo Villalba manages penal and national litigation for CCAJAR, primarily criminal defence and the representation of victims of serious human rights violations. He has been vilified by the authorities and characterised as a defender of terrorism and an auxiliary of guerrilla forces, particularly since his work on a case implicating the former Colombian president Alvaro Uribe. The case is based on allegations of witness tampering and fraud relating to crimes committed during the country’s five decade civil war.
Reinaldo Villalba’s investigation was deemed legitimate in 2018, with the court finding Uribe’s allies guilty of witness tampering. Villalba and his organisation, the José Alvear Restrepo Lawyers' Collective (CCAJAR), are still awaiting the decision as to whether there is enough evidence to bring Uribe to trial. Uribe has denied all allegations against him.
Villalba reported forced retraction of statements against the former president and his brother, who is also on trial. Claims that the brothers were linked to the creation of a paramilitary bloc in the Department of Antioquía have led to further pressure on witnesses from third parties. After senator Iván Cepeda brought incriminating statements from two paramilitaries to the Attorney General’s Office, Uribe and his supporters discredited the court and alleged unjust prosecution.
In addition, Mr Franklin Castañeda, President of the Committee of Solidarity with Political Prisoners (CSPP), was accused by Senator Álvaro Uribe Vélez of bribing witnesses who had given evidence before the Supreme Court of Justice. In February 2018 the Supreme Court ruled that the CSPP had acted properly and on 24 October the CSPP filed a lawsuit for slander and harassment against Álvaro Uribe Vélez and others.

"Advocacy Forum significantly contributed to create a UN monitoring mission on human rights violations in Nepal which created the right environment for the peaceful political negotiation that end the conflict in the country." Mandira Sharma
Lawyer and human rights defender Mandira Sharma co-founded Advocacy Forum in 2001, Nepal’s trail blazing organisation of human rights lawyers. Mandira grew up in a remote area in western Nepal and, encouraged by her mother, became the first woman in her village to become a lawyer. She studied in Kathmandu and gained a scholarship to do her L.L.M. (Master of Law) at the University of Essex.
In 2006 Mandira won the Human Rights Watch prestigious Human Rights Defender Award. ​​​​​​​
Watch PBI UK webimar where Mandira Sharma talks about  WOMEN'S RIGHTS DURING THE PANDEMIC 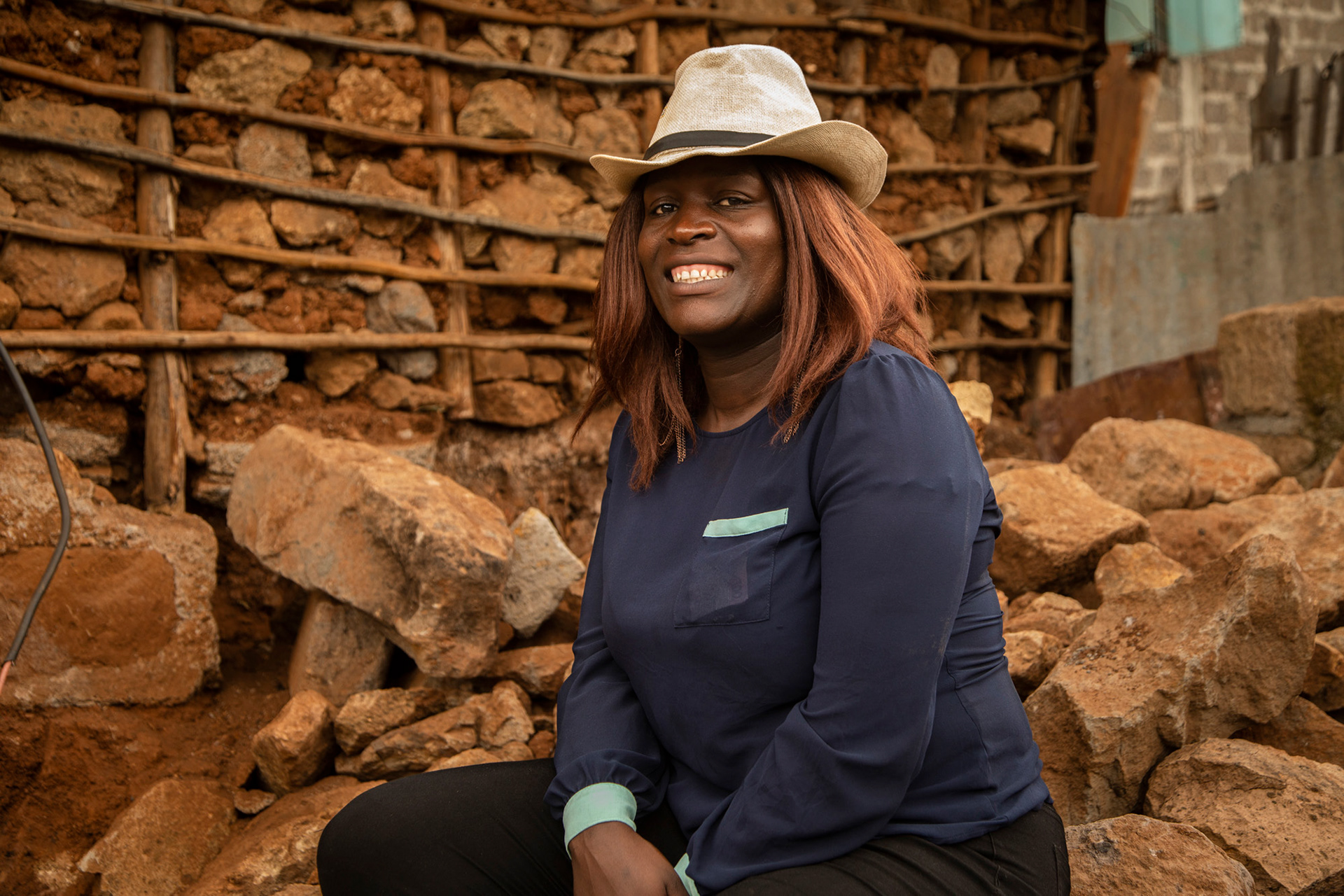 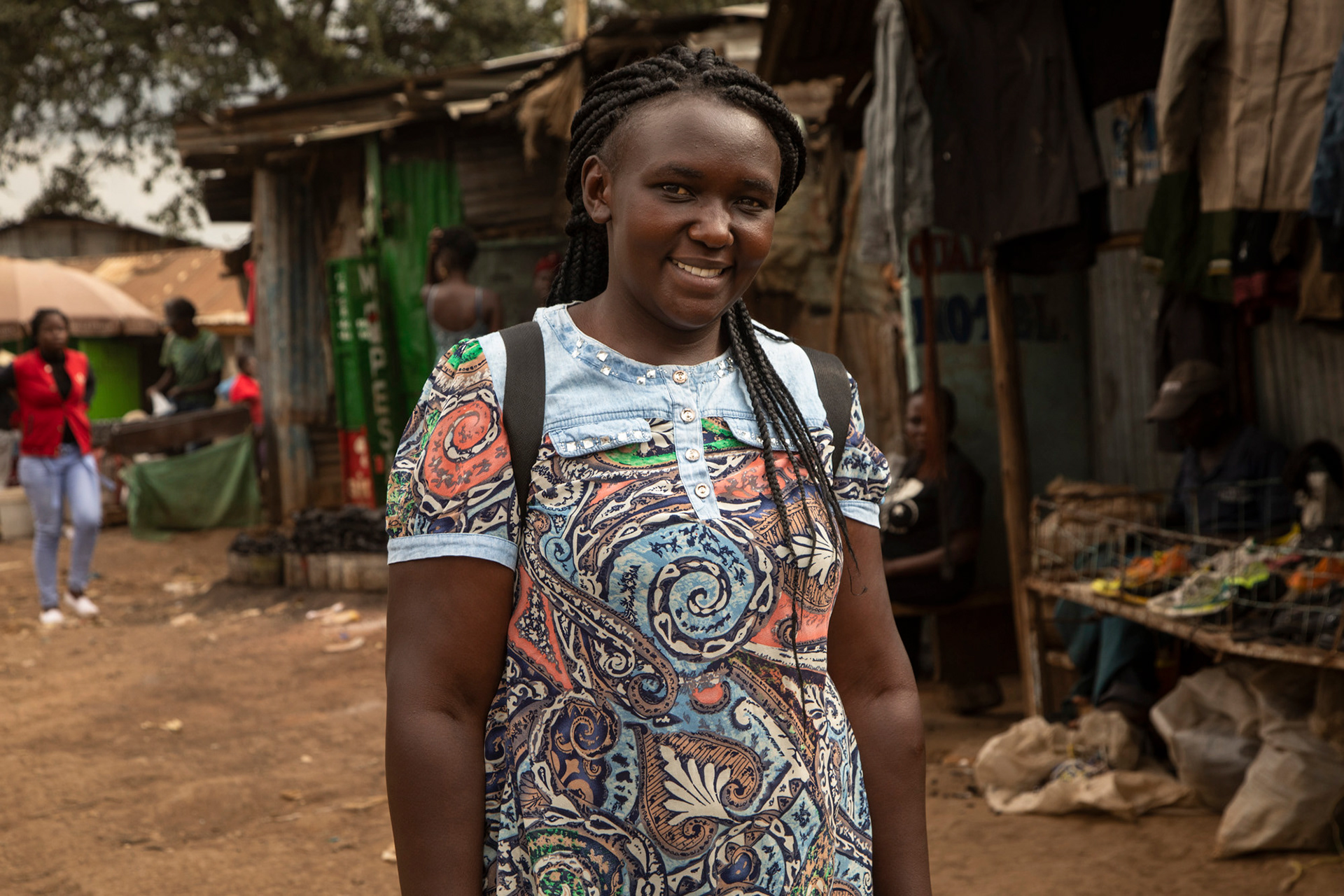 “I work with young women. Young mothers, vulnerable ones. Because once I was vulnerable. So that is what motivates me to work with these women. […] It doesn’t matter what time, what age, I’ll come out and help you. I do it because I love what I’m doing.”  Editar Ochieng
Editar Ochieng is a feminist activist who defends women's rights in Kibera urban settlement, Kenya, and around the world. She fights sexual and gender based violence (SGBV) by creating awareness within the government, advocating for the recognition of SGBV as a national disaster and for the implementation of appropriate policies. Being a SGBV survivor at 16 years also inspired her HRD work, which she started when she was 21 years old. As the founder of Feminist for Peace, Rights and Justice Centre she brought survivors together to work together to save the Kibera community from different forms of violence. The Centre supports the community in Kibera in understanding their rights and accessing justice. Editar is an authentic, courageous and transformational leader. As a proud and radical intersectional feminist, she doesn’t apologize for challenging power dynamics and patriarchal systems that oppresses women systematically.
“being in the field for almost ten years, it has been amazing because every day we manage to get different results and they are very positive results.” Editar Ocheing
Watch PBI UK webinar where Editar Ochieng talks about GOVERNMENT AND GRASSROOTS RESPONSES IN KENYA

Yaneth Bautista is the director of the Nidia Erica Bautista Foundation for Human Rights, an organisation that supports 500 victims of forced disappearance in eight regions of Colombia. Yaneth’s sister (for whom the foundation is named) and her partner were abducted by the army in 1987 for being members of the Movimiento 19 April political group. Since that time Yaneth has been fighting for justice for victims of disappearance.
"We achieved the creation of a search unit for disappeared persons in Colombia. It's a dream come true." Yaneth Bautista
"We want to submit 500 cases from the eight regions in which we work to the Truth Commission. We have a whole team which runs the Leadership School for Women Relatives." Yaneth Bautista

Javier Avila, Carlos Morales, Daniel Prado, Yaneth Bautista and Maricela Vazquez talk about the archievements on human rights defenders and their sense of hope.
Watch the 'THE DEFENDERS' short documentary 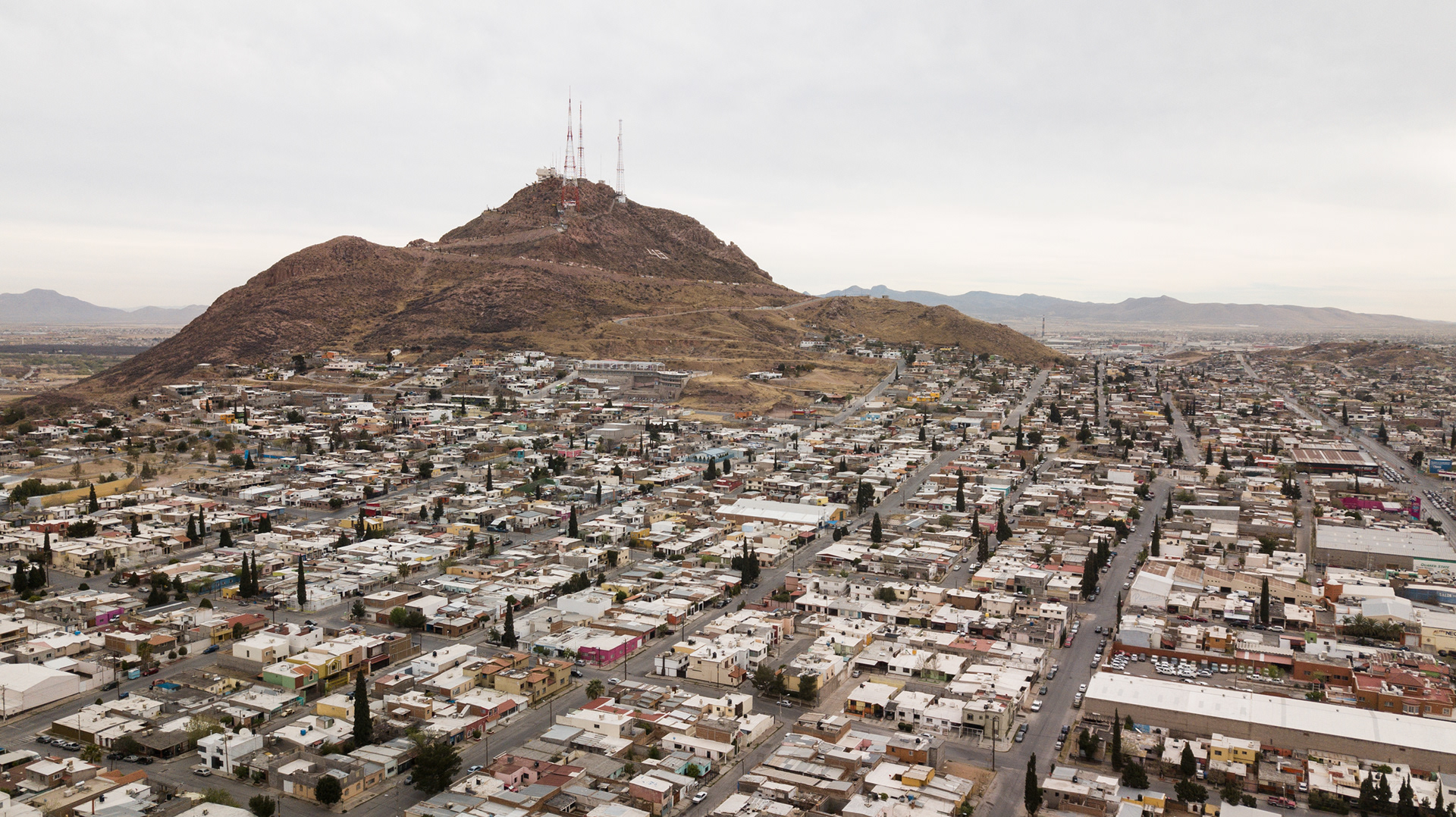 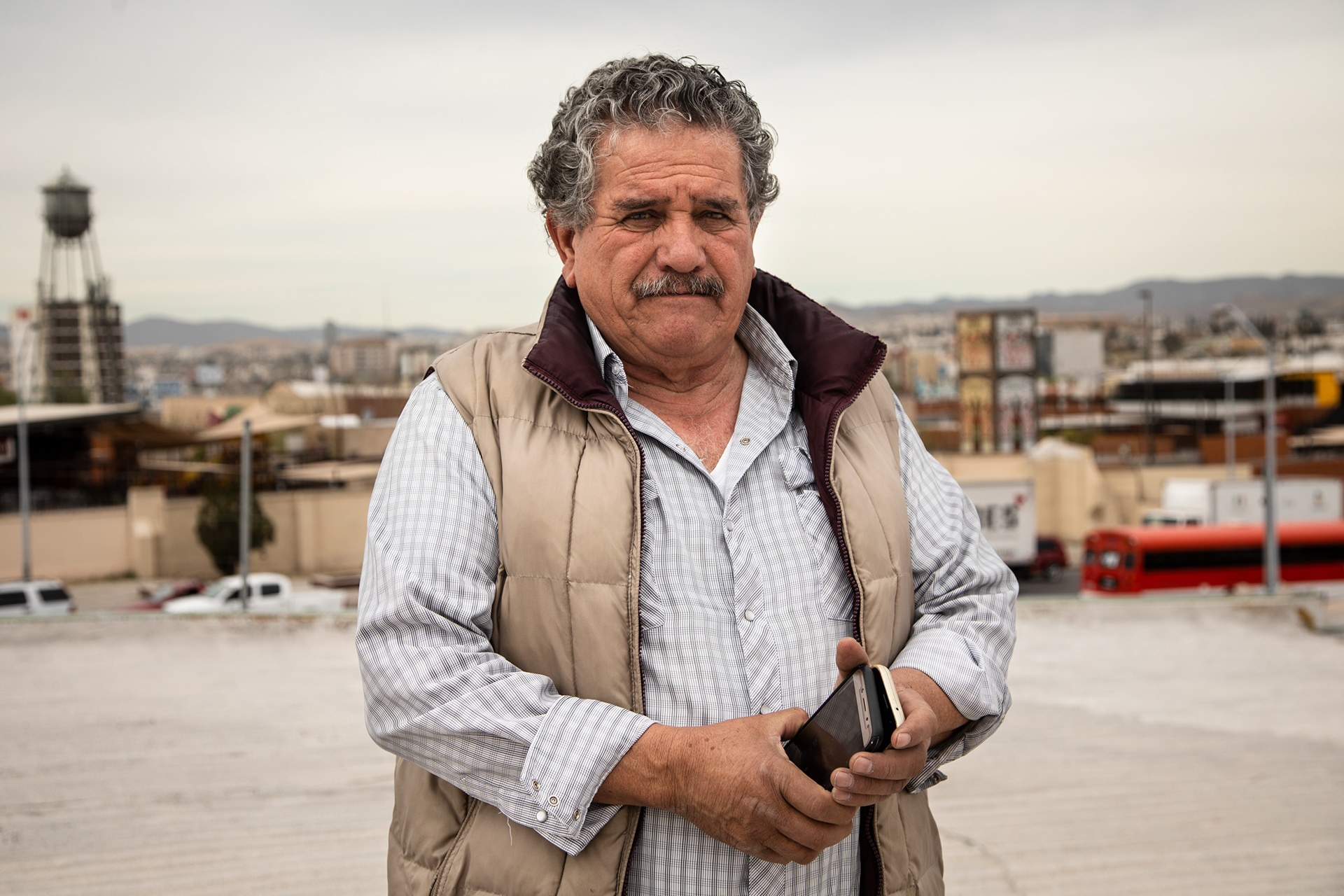 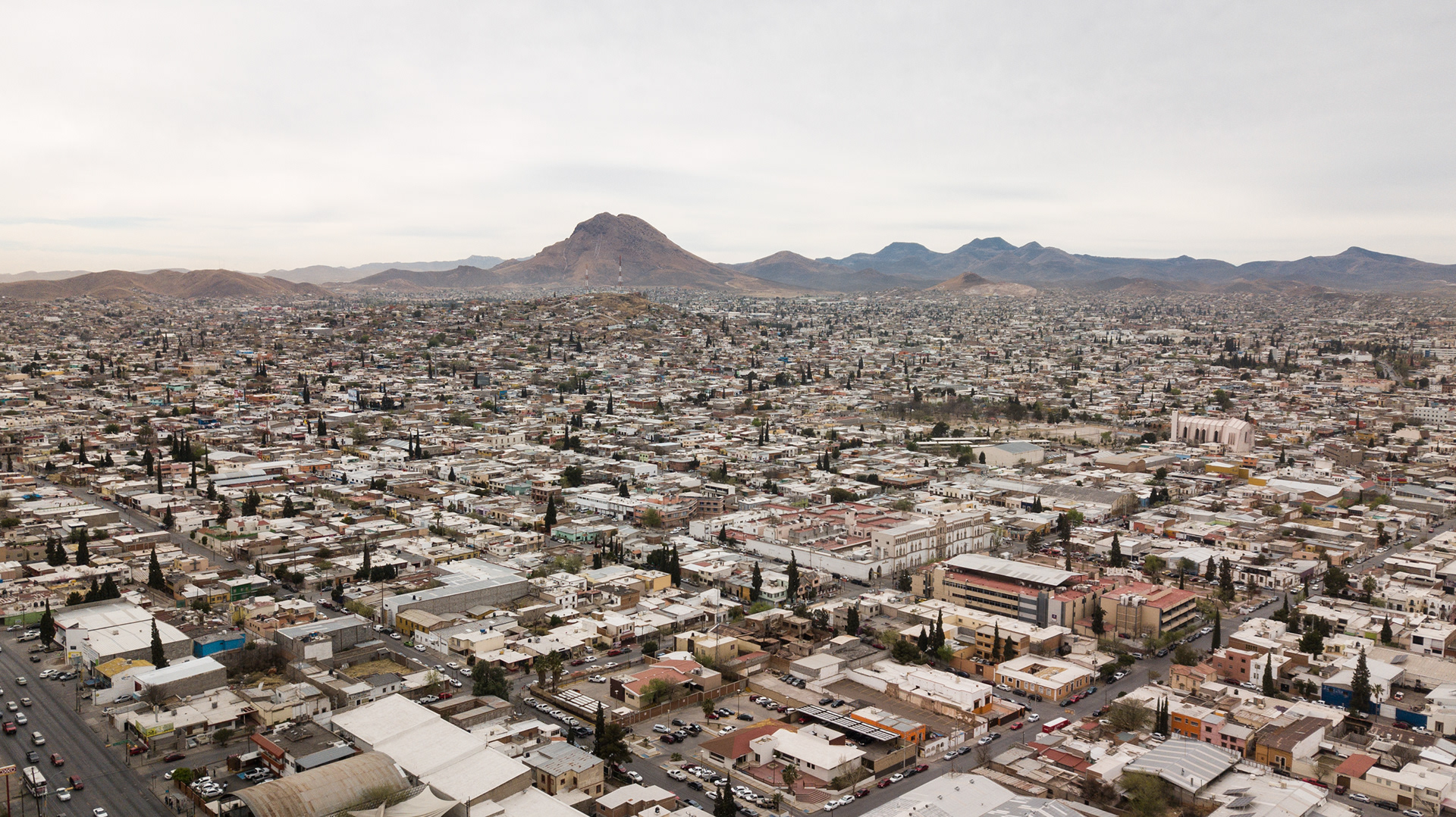 Gabino Gomez fights for women' rights in Chihuahua, Mexico. Despite the trauma of four women in his family being brutally killed, Gambino continues to strive for the protection of human rights. We owe a lot to defenders like Gabino, the least we can do is stand in solidarity and support them in their vital work.
"The government will change because they have to understand that we exist because they have not done their job. The day they do it correctly we will have no reason to exist. But many of the policies exist because we have pushed for them. Us all over the country, huge number of organizations, activists, Human Rights Defenders of all kinds" Gabino Gómez